“I want every little girl who someone says ‘they’re bossy’ to be told instead, ‘you have leadership skills,'” said Sheryl Sandberg, the COO of Facebook. This somewhat overused, but nevertheless powerful quote resonates with Women’s Resource Center’s mission to empower girls through its Girls Lead Program, which prides itself on taking girls with untapped leadership skills and teaching them that they can do anything because they have that potential already inside themselves. Girls Lead, which you can learn more about here, is a program for middle and high school girls who are chosen by their guidance counselors and is focused on four core skills and aimed at teaching community advocacy. 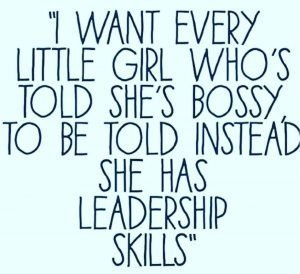 What does a girl’s development have to do with being told she’s bossy, you may ask? The specific words we use hold power and some words come with particularly negative connotations, especially when they are relegated specifically to certain genders. What if instead of being bossy she was simply trying to assert her independence?

Of course, it isn’t just the word “bossy” that young girls get called that is worrisome. But bossy has a particular way of silencing someone, by saying they are trying to take up too much space in this world.

We need to change the meaning around the word bossy when hurled at girls for stating their opinions, wants and needs, because these are the same women who will grow up to be questioned when walking into a boardroom based on their gender.

A little girl who is called bossy one too many times may grow up to question whether or not her opinions are valid and may begin to fear speaking up, posing a real problem to her growth and development. We need to work together to change the words we use to define girls so they grow up to be empowered women.

Party With A Purpose

Liz and Kate are hosting this Party with a Purpose to get to know our neighbors better, including the WRC. Knowledge is Power - Our Neighbors Can Make All the Difference!  Looking forward to seeing you on January 19- you are warmly welcomed! Click here to donate online.

The Women’s Resource Center in Wayne has recently welcomed three new board members to guide the Center in expanding their services to clients in the coming years. In addition, they have hired a Resource Coordinator who will provide counseling and case management to clients. All of these individuals have critical roles to play in expanding WRC’s presence in the community.
Recent Posts
Archives
Categories
Sign up for the WRC monthly newsletter     >>>
Copyright 2020 Women's Resource Center - All Rights Reserved