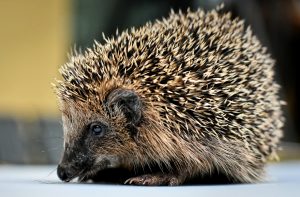 Yes, you have indeed heard me correctly. People are Porcupines. All of us, all of the time. We are cute cuddly animals that when threatened, turn into barbed, dangerous beasts that even a leopard would do well to steer clear of.

Now what exactly do I mean by this? To understand that, you’d have to understand the human brain. Put very simply, when there is a perceived threat to our life, liberty or sense of self, humans react in one of four ways. We can fight, flee, freeze or fawn. The fight response can look like angry outbursts, trying to control the actions of others, bullying behaviors, not being able to hear other points of view, entitlement, demanding perfection. The flight response looks like obsessive or compulsive behaviors, anxiety and/or panic, busy-ness, worry, workaholism, being unable to be still or relax, or over achieving. Freezing can look like spacing out, feeling as if what is happening isn’t real, isolating oneself from the outside world, being a “couch potato” struggling to make decisions, having brain fog, being achievement phobic, feeling dead or lifeless. Lastly fawning, our much less understood response to threat, includes the tendency to be a people pleaser, being afraid to express one’s real opinions being a “savior,” being unable to stand up for oneself, having large concerns about one’s social standing and acceptance by others, and needing to “fit in.”

The thing is, when we feel threatened, the majority of us have a reaction that fits within one or two of these categories. It is exactly how we keep ourselves safe. But safe from what?

The problem here is, that because of our life experiences thus far, many of us perceive each other as the threat. When another person enters our personal space, words, actions, smells, appearance, and any number of things, can trigger an unconscious danger response in us that sends our quills straight up. We become “prickly” and our interactions become defensive as a way to keep us safe.

Have you ever had a conversation with a loved one that turned into an argument, and when you look back on it you cannot understand what made you, or the other person so upset? This happens as a direct result of an unconscious threat. Unfortunately, our knee-jerk reactions, designed to defend us from physical or emotional threat, have a destructive effect on the very things we hold dear. Our relationships. (Think Godzilla and its effect on the city ok Tokyo). In those moments we are dangerous to each other. We are porcupines standing quills at the ready, trying desperately to defend ourselves from harm, and in the process, destroying our relationships.

The only way to mitigate for our brain’s inherent desire to keep us safe, is to allow the emotional discomfort that comes when we feel threatened.

That’s right. We have to feel it…without reacting to it.

I often tell clients to pause, and during the pause, to take a moment to scan their bodies for the tell-tale signs of emotion, and to focus on that, no matter how uncomfortable… rather than saying…or doing anything in that moment.

Emotions come like an ocean wave.  This wave of emotion is ALWAYS felt in the body as it rises, crests, and then retreats. If we simply allow ourselves to be AWARE of the emotion as it crests… no matter how uncomfortable… we can stand with our quills out, but not harming our relationships, as we simply watch the progression of emotion as it passes through us. This is how we remain resilient in the face of challenging emotion.

It is only after the wave has passed, and our quills have lowered, that we can engage with the other person safely.

Yes, it is absolutely possible to hug a porcupine, but only when its quills are down.

The Women’s Resource Center (WRC) is excited to announce a $25,000 grant from the…

When we are in the sweet spot, where our relationships feel good, our jobs are…