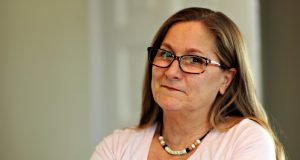 Nearly 20 years ago Diane found herself married to an addict who finally admitted he’d never be able to quit. Armed with that knowledge, she knew she had no choice but to leave him.

She took her three children, and also his two children, whose mother had passed away, and she left. She was fortunate to have a good neighbor who took her in, and helped her get food and clothing.

“I needed compassion and understanding,” she said. “It helps just to know you’re not the only one.”

Eventually Diane was introduced to Delaware County Community College and their job training program. Out of the options offered Diane chose carpentry since it is one of the few trades where men and women are paid the same.

“I went to school off and on for nearly five years while also raising kids,” she recalled. “I thought of myself as half man, half mom!”

Through the Community College Diane was introduced to WRC.

“The WRC gave me a place to tell my story. They taught me how to break free and get a life,” she said.

After years of hard work and a lot of ups and downs, today Diane is doing great. Her five children are all nearly grown and out of school. She continues to work carpentry and set a positive example for her family.

“I went from being the wife of an addict to seeing myself as someone who could provide,” she said of her journey.

“I went from being the wife of an addict to seeing myself as someone who could provide.”