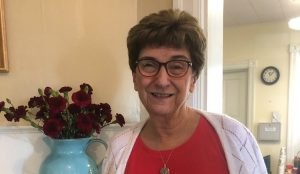 Meet our Helpline Volunteer Fran Ley! Fran has been volunteering with WRC since 1983. In a recent Q&A she shared her motivation for volunteering in this role.

What has kept you volunteering for so many years with the Helpline?

Social justice. In particular, social justice for women. You’re giving them the ability to advocate for themselves. When you give people the information, and you are a friendly voice on the other side of the line, you can actually hear them relax. Hearing them react to someone who cares is rewarding. By the time they call us, they are used to being rushed off the phone or told it’s going to cost them more money than they have.

Can you share a memorable call that inspired you?

I spoke with a woman who had severe physical problems.  She had been stalked by her ex-husband for years. At one point, she called the police and they found him hiding in the bushes outside her home with a weapon. He was jailed but when he was later released from prison, he tried to get custody of their children, using her disability as the reason. I connected her with some of WRC’s affiliate attorneys and several advocacy groups. I just couldn’t believe he was actually having success in the court process!

What have you learned from your time on the Helpline?

Determination. The willingness to ask for help. To be grateful for what I have. And, how resilient people can be. You can’t give up. One of the difficult aspects of being on the Helpline is that you don’t know how things turned out. You give them the information, and then it’s like a leap of faith. You need to let them fly on their own.

If you could wave a magic wand, what service or resource would you want to provide for WRC’s Helpline callers?

Free legal representation and follow up for divorce and custody.  An attorney who can represent them and see the whole case through.

“WRC is close to my heart. I keep volunteering because I enjoy dealing with feminist social justice issues.”